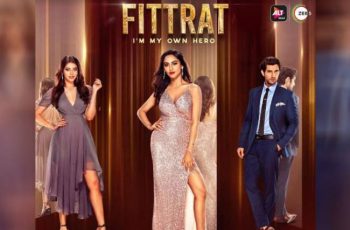 After a splendid music and trailer launch, the wait is over as FITTRAT streams now on ALTBalaji and ZEE5. The web-series, which grabbed eyeballs for slick cinematography and its soul stirring original music is a 15 episode story of Tarini Bisht who is a gold medallist turned gold digger, and is unabashed about her life choices She is one girl with only one goal that is marriage to one of the richest bachelors available. The only two things she really cares about are, her dad and her childhood best friend Amy who is born and raised in the lap of luxury and all the riches of the world. In her quest for this desirable rich bachelor she bumps into Veer Shergill, a charming and calculative man who plans every step he takes, right until he meets Tarini. How these three lives take an unexpected turn is what makes the web-series, even more gripping. Making their digital debut are the gorgeous Krystle D’souza as Tarini, Amy is portrayed by the talented Anushka Ranjan and Veer by heartthrob Aditya Seal. The series also has an ensemble cast of Divya Seth, Kitu Gidwani, Aru Krishansh, Priyanka Bhatia, Aditya Lal, Mohit Chauhan, Babla Kochar and Kaizaad Kotwal in pivotal roles.

The show revolves around Tarini, who is a go-getter and achieves whatever she wants since childhood. Despite being a topper of her journalism course, she goes against her father’s will and ends up moving to Delhi harbouring her shortcut to success. She makes an entry into Amy’s uber rich world, with an aim to find the wealthiest guy to get married to. Tarini’s simple and sure shot plan to become rich gets complicated when she falls in love with the desirable Veer, who turns out to be Amy’s fiancé. This revelation shatters Tarini’s world and leads to misunderstandings between the two BFF’s eventually pitting them against each other. Tarini’s pursuit of gold and richness of the world brings her to a crossroad in life where she stands alone having lost both her love and friendship. She pulls herself up, charts her new life journey and emerges as her own saviour, making her realise that the hero and gold she has been looking for all this while is within her. She overcomes her fears and insecurities to become the best version of herself. It is this entertaining yet thought provoking journey packaged with slick cinematography, crisp portrayal of characters and the large canvas glamour and apt humour that makes the web-series a gripping and must watch.

FITTRAT also showcases soul-stirring songs that are sung and composed by some of the most celebrated musicians in the industry. The most popular song ‘Manmuradein’, crooned melodiously by Vivek Hariharan and Anusha Mani is already touching the hearts of the audience with its perfect balance of emotions.

On the launch, Krystle D’Souza said, “I have always thanked Ekta for believing in me. When she offered me the character of Tarini, I believed in her vision and decided to go forward with it. Honestly this character is a complete contrast to my personality and belief system. Hence it was a challenge for me to play this part but Ekta’s confidence in me is what made this possible. I am very excited and really looking forward to the audience reaction.”

Anushka Ranjan quipped, “The digital medium gives artists the opportunity to explore characters in its entire gamut of shades. When I read the script, I was sure that this is the kind of show with which I would want to make my digital debut. The character of Amy gave me a chance to explore a completely new side of me. Amy is vulnerable, but I am not. Exploring this side was a lovely experience and I had a lot of fun playing this character.”

Aditya Seal further added, “Veer is conniving and shrewd and would go to any extent to achieve whatever he wants. Understanding Veer’s mind, his thought process, his personality came as a challenge to me and it required a lot of preparation. This web-series apart from being entertaining has a strong message. It will motivate you to do what you want and through FITRRAT, we want to communicate that there is a lot more to life than just money.”

Produced by Ding Entertainment, FITTRAT With a mix of an inspiring storyline and some perfectly balanced original tracks looks nothing but promising.