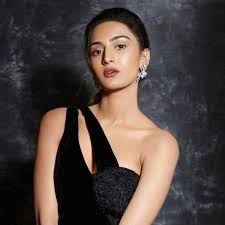 Having greenery around us always gives a soothing experience and in the same way having a pet also keeps all tension at bay. They are the best stress buster. Many people have different pets at their homes but dogs are common pets. Celebrities also have and just love them to be around. Television actress Erica Fernandes’ is also an avid dog lover and is a proud owner of Golden Retriever who she calls Champ. Her Instagram feed is filled with his pictures and the beautiful moments both have spent.

She had talked about her relationship with her dog and said that she feels like it is her child. “He always brings a smile on my face and I am very happy after he came into our life,” she added. The actress always celebrates his birthday and dresses him up in a very cute style. Once on his birthday, she had made him a polka dress and he was looking extremely cute. It will not be wrong to say that he is a show-stealer in many of her pictures.

The Kasautii Zindagii Kay actress is fond of dogs and loves spending her free time with her pets. In her social media posts, one can find a limitless number of pictures of her dog. She never gets tired of praising and adoring him.

On the work front, the actress is gearing up for her next serial ‘Kuch Rang Pyaar Ke Aise Bhi’ season three. The show’s previous seasons were also very popular. In each season, the makers have shown the different angles of relationships. In season 3, viewers will see Dev and Sonakshi’s new life and how are they coping with it. The show trailer has already been released.