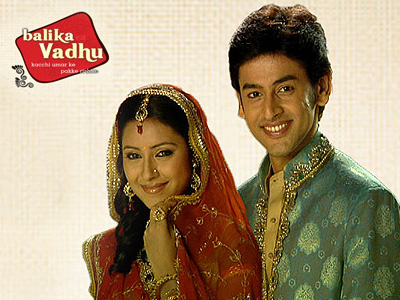 Set in rural Rajasthan, Balika Vadhu follows the story of Anandi, a child bride and Jagdish, who married Anandi at young age. Anandi had to bear the hardships of a child bride.Later on, while becoming young adults, both of them divorces and Anandi is married to Shivraj Shekhar whereas Jagdish marries Ganga, another child bride. The story now follows their journey full of twist and turns, and ups and downs.

Balika Vadhu — Kachchi Umar Ke Pakke Rishte (English: Child Bride — Strong Relationships of Tender Age), commonly abbreviated as Balika Vadhu is a Indian television drama series featuring the hardships faced by an Indian child bride. It is the flagship show of the channel that premiered on 21 July 2008 on Colors TV and still running. It is also the most popular show of the channel till now. It airs Monday to Friday at 8pm.

The show is set up in rural Rajasthan emphasizing the practice of child marriage showing Anandi (Avika Gor), a young girl married to Jagdish (Avinash Mukherjee), the only grandson of Kalyani Devi (Surekha Sikri) also called Dadisa and Maasa. Kalyani is a widow with high regard for rituals and superstitions. She has two sons, Bhairav (Anup Soni) and Vasant (Satyajit Sharma). Bhairav and his wife, Sumitra (Smita Bansal), have two kids, Jagdish and his sister Suguna (Vibha Anand). Vasant is a widower without kids. Gehna (Neha Marda) is the second wife of Vasant.
Vasant gets married to Gehna, a much younger girl, who rebels against her mother-in-law. After a lot of resistance, Kalyani Devi threatens to throw Gehna out of the house. It is then revealed that Gehna is pregnant with Vasant’s child. All emotions change, and Gehna agrees to deliver the child. Later Gehna and Vasant are shown to develop feelings for each other and Vasant also defends his wife in front of his mother when required.
When Suguna gets ready to leave for her husband’s home, her husband dies at the hands of some bandits. Then Badi Jiji (Farida Jalal) arrives, who is sought to bring happiness and joy into the household once again. She leaves after a tiff with her sister, Kalyani Devi.
Shyam (of Dharam Veer fame) is introduced as the new character. He is a city educated young boy who comes to the village. He does not believe in the age old traditions followed in the village. He plays a prank on Suguna and she reprimands him for it and also tells him that she is a widow. Shyam saves Jagdish’s life and they become friends. It is also revealed that Suguna is pregnant with Pratap’s (her dead husband) child which shocks everyone. Dadisa tries to abort the baby but in vain. Then it is revealed that Shyam loves Suguna and asks her family for her hand in marriage, knowing full well her situation.
Later, Shayam marries Suguna. Initially Shyam’s parents had allowed this marriage but when they realize Suguna is pregnant, they oppose it and ask Shyam not to marry Suguna. Shyam opposes this and marries Suguna anyway. Shyam’s parents disown him and he starts living in Suguna’s parents’ house. Shyam feels very happy to know that Suguna cares for him because one night Suguna goes to the terrace to bring Shyam in as it is raining heavily and the scene ends with romantic results. Suguna too begins to develop a liking for Shyam.
A new character Mahavir Singh(Rajendra Gupta) is introduced. He is revealed to be Kalyani Devi’s brother-in-law, and had misbehaved with her after her husband’s death. They had parted ways immediately after that with a lot of friction. Mahavir Singh still harbours enmity against Kalyani Devi and seeks revenge. He is ready to resort to any means and takes to disrupting the lives of villagers in Kalyani’s village, trying to gain authority over the entire village.
On the other hand, Sundar befriends Jagdish. He is a spoilt child who whose company has a negative influence on Jagdish.
Anandi’s parents lose their land to Mahavir Singh and approach Kalyani Devi for help. She refuses, but Anandi and Jagdish go to Mahavir Singh with the request. Kalyani Devi gets furious once she finds out and throws Anandi out of the house. Anandi and her family face hard times because of her mother’s sickness and father’s broken leg. Having no money, it makes life more difficult for them, and they also lose their land and home. The family starts working as servants in Mahavir Singh’s house because he helps them with money for the father’s leg operation.
Bhairon saves Anandi’s family from their plight, and gets her back home on Diwali. Kalyani Devi forgives Anandi and they celebrate Diwali happily. Then Gehna gives birth to a boy after much difficulty.All are extremely happy with this,especially dadisa.They happily celebrate the arrival of the baby.But Gehna remembers dadisa’s condition,that she had to leave by giving the heir in her hands.So she becomes sad and keeps the conditon by leaving her child in hands of dadisa.After sometime the ill health of the child makes Gehna to return home.