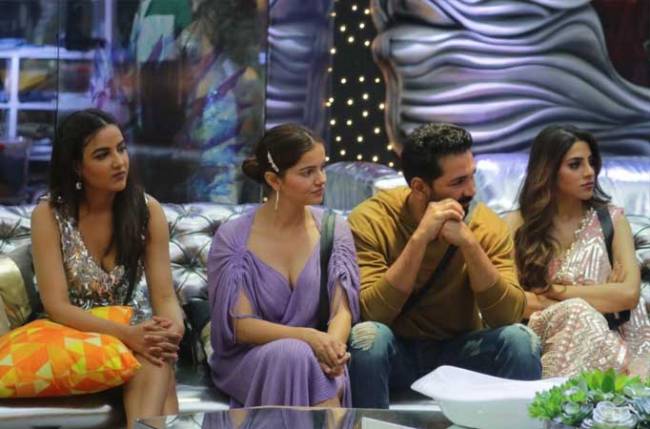 Weekend Ka Vaar 1 – It’s the most-awaited, dhamakedar day of the week when the contestants put on their best in anticipation of what’s in store for them when they virtually come face to face with the master host, Salman Khan.

It’s the first Weekend Ka Vaar of Bigg Boss 14, and Salman Khan begins the show at his favorite corner of the house – The BB Theatre!

He begins by watching the bulldozer task in the theatre and then discussing and reprimanding the contestants over different muddas of the house that happened during the week, especially those that have been important. He praises Rubina for standing up for herself against the Seniors and making sure she’s heard while reprimanding her husband Abhinav for interfering in her game. He also asks Abhinav to let l Rubina fight her own battles and to not always impose his opinion on her.

Taking a massive jibe at Abhinav Shukla, Sara Gurpal, and Nishant Singh Malkhani, Salman Khan introduces them as the live audience inside the house, who seems to be there to merely watching the game as spectators and not playing it. Pointing out at Jaan Kumar Sanu’s game, Salman tells him that he is coming across more as a fan of Sidharth Shukla than a contestant of the show.

Impressed by Nikki Tamboli, Salman Khan praises her for her great dedication for the game and her consistent approach towards performing each task. It so comes as a surprise for everyone when Salman allows Nikki who two-minute unlimited access inside the BB Mall and to pick up whatever she wishes to. An excited Nikki rushes and grabs hairbands, coffee, clothes, bags and all that she fancies within the stipulated time.

Before announcing the eviction for the week, Salman Khan talks to Eijaz about the dark phase of his life that he was heard talking about to Sidharth Shukla. He also motivates Eijaz to buck up and start playing his own game in the house.

Heading to the most dreaded moment of the week, Salman Khan leaves the contestants on a cliff-hanger! A major revelation stuns all.

Who is going to bid adieu to the house this week? Who’s game plan failed?

Unlock entertainment, excitement, and drama with MPL Presents Bigg Boss Powered by Dabur Dant Rakshak Ayurvedic Paste & TRESemmé, Beauty Partner Lotus Herbals, every Monday to Friday at 10:30 pm and Saturday- Sunday at 9:00 pm only on COLORS and watch before TV on Voot Select.