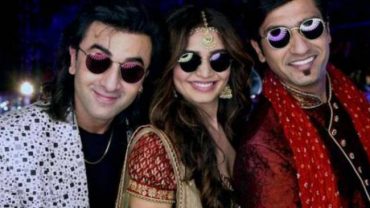 Karishma Tanna has carved a niche for herself in the entertainment world. She has acted in many television soaps. The beauty was also seen in the hit film, Sanju. Her latest project is the adventure-based show, Khatron Ke Khiladi 10.

The actress has a lot of fan clubs dedicated to her. One of the fan, clubs shared a video where you can see the actress doing a dance rehearsal along with superstars Ranbir Kapoor and Vicky Kaushal.

There are dancing on the tunes of Bhopu Baj Raha Hai a song that was only used for promotional activities and wasn’t a part of the movie.

In the video, you can see with what dedication and hard work the actors put into a song and perform.

As an audience, we get to see the full song but a lot of hard work is put into it.

Sanju was the biggest hit of 2018 and Ranbir had bagged all the awards for best actor for his role as Sanjay Dutt.