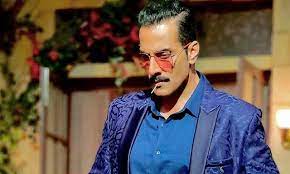 MUMBAI : Currently, Anupamaa is currently the top-most show on Indian television. The show is performing remarkably well and currently has the highest weekly BARC ratings.

In the latest episode, The Shah family finally welcomed Kinjal into their home and they have excitedly decorated the entire house to welcome her and the baby. Rakhi tells the family that she doubts Toshu will be able to take care of Kinjal and the baby and everyone is shocked as to why is Rakhi thinking this way.

Toshu is worried that Rakhi might reveal his extra–marital affair to the family and then he would lose Kinjal and the baby.

Recently, there were rumours that off-screen, there is a rift between Rupali Ganguly aka Anupamaa and Sudhamshu Pandey aka Vanraj. In a recent interview with Sudhanshu Pandey, we got to know the truth behind it.

There were rumours that there is a rift between you and Rupali Ganguly. What do you have to say about that?

“That is something for the people to come and see on the set as to how we are with each other. When you call it a rumor, you answer your own question and there is nothing to believe in a rumour.”

You have done modelling before and multiple films as well. After Anupamaa, are you interested in exploring OTT or the big screen?

“I have already done five series before I jumped into Anupamaa. It was a big leap for me as this is my first daily soap. I have done television a couple of decades back when there weren’t proper daily soaps. Rajan Shahi has directed a couple of things I did back then and Mahesh Bhatt was producing. I have worked with Imtiaz Ali back in the day as well and he is a very old friend of mine. It was all 2 hour long format shows. For now, if I am committed to Anupamaa, I am committed to Anupamaa. If I decide to walk out of the show or if the show organically comes to an end, then I would explore other mediums. If I have the time and it’s something of a guest appearance, I will do it. But I cannot be on two boats at the same time.”

How do you like the current track Anupamaa? The TRP has fluctuated by dropping and then rising again recently. What do you have to say about that?

“The track of the show has always had something interesting, be it in terms of drama or character. Everything has been instrumental in enhancing and creating the drama that we have maintained from the beginning. Speaking of the TRP, in spite of hitting a lower TRP we are still way ahead of the shows which are on number 2 and 3. In terms of the TRP going up and down, that is a very natural phenomenon. Essentially what matters to us is that by God’s grace, we have managed to maintain our number 1 spot and it has been a very tough task as it is a very big challenge to be able to hold that position for so long.”

Sudhanshu Pandey is being loved for his performance as Vanraj Shah on the hit show Anupamaa. The fans can’t wait to see what happens next.