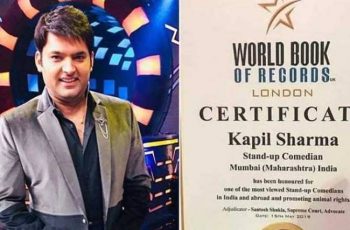 MUMBAI: Kapil Sharma is one of the most popular comedians in the entertainment world. His comeback comedy TV series, The Kapil Sharma Show, is doing well on the TRP chart.

The comedian-actor is loved for his hilarious antics on the show. He is undoubtedly one of the favourites of the comedy show lovers.

Kapil is indeed in a happy space personally as well as professionally. And now, he has added another feather to his cap.

Well, the host-turned-actor, who tied the knot with his long-time girlfriend Ginni Chatrath last year, has been honoured by World book of Records London for being one of the most viewed stand-up comedians.

A fan page of the popular comedian took to Instagram and shared a certificate of the honour. Take a look below: