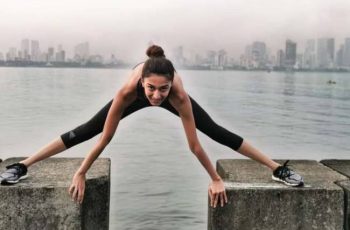 The popular actress, Erica Fernandes, is known for her television work. She has mesmerised the audience with her acting chops and style statements. Well, she is not just a talented actress and a fashion diva but also a sporty person and her latest post is the proof.

Erica took to her Instagram handle and shared a picture wherein she can be seen exercising besides the sea side. The actress looks all pumped up as she strikes a pose for the camera.

On the professional front, Erica made her debut in the Indian television industry back in 2016 with the show Kuch Rang Pyar Ke Aise Bhi in which she was paired up opposite Shaheer Sheikh. She is currently wooing the audience with her performance in Ekta Kapoor’s show Kasautii Zindagii Kay 2. The actress plays the female lead role in the show and is seen opposite Parth Samthaan.