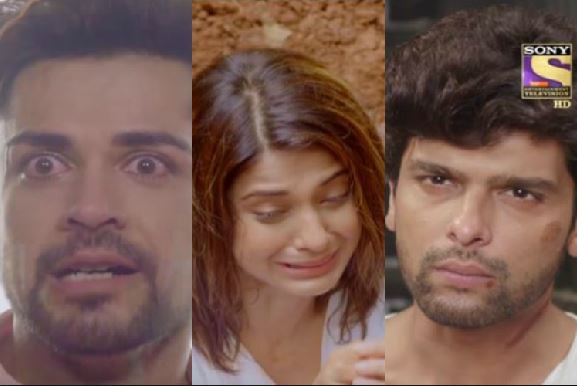 Sony TV’s Beyhadh has now reached its peak with the game becoming more interesting amidst the protagonists. The undefeated Maya will finally seem to be losing her cause as she has two major hurdles to cross now and they are –
Samay and Arjun.
Yes! That’s right. While Samay was presumed to be dead, Maya plotted the master plan of getting herself killed in the eyes of the world and have Arjun sentenced to death for her murder charges. In the episodes so far, we all saw Maya’s new avatar of how she was trying to live a free life in an ashram in the initial days, apparently getting rid of her psychotic self. But the latest episodes have already shown how that’s not to happen.
Maya has not changed a bit as she has her brain racking in the wrong direction once again.
On the other hand, we saw Arjun plot his escape from jail to hunt down Maya and get his revenge. In the future episodes, we will see how Maya’s troubles will only be on the rise as Samay will be re-entering her life as he is very much alive and also has revenge on his mind.
Maya has already been given the hint about ‘someone’ knowing that she is alive as she received a red saree and a mangalsutra too.
That’s it. She is now aware that her ‘being-dead’ plan hasn’t gone down too well as her enemies are aware about her being alive. In a drastic attempt to cover her tracks, Maya will burn down the very Ashram where she was staying all along. And post that, she will decide to tie up one last loose end, her mother, Jhanvi.
All through her ups and downs, Jhanvi bore witness to her daughter’s crimes only to remain silent courtesy, her illness.

But this time, not wanting to take any chances, Maya will decide to kill her mother AGAIN (which by the way will be her third attempt to do so).
This is when we will witness Samay’s re-entry which will threaten and surprise Maya.
It is being said Ayan, who has been trying to save his brother Arjun and seeks revenge too, will try to enter Maya’s house to find clues only to find it locked from inside. When Ayan will break into Maya’s house through the window, Samay’s presence will shock him.
It will then be revealed that some fishermen saved him when he was pushed into the water after being stabbed and after all this time, he is back to get his revenge from Maya.
Maya will tell Samay to let her do what she has to do (kill Jhanvi) to which Samay will take a stand against her manipulative instances.
Will Samay actually side with Arjun? And with both, Samay and Arjun back in her life, to what lengths will Maya go to protect herself? Only time will tell…