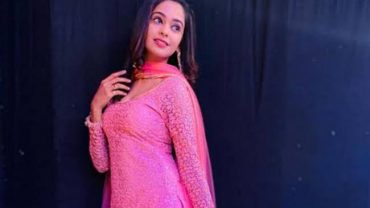 Zee TV s Kumkum Bhagya has been one of the top-rated shows of Indian Television for six years now. In fact, it has entertained the audience with twists and turns in its storyline for years now. Just before the COVID-19 lockdown, we saw Ranbir (Krishna Kaul) finally confessing his feelings for Prachi (MugdhaChapekar).

Just when a surprising twist was going to turn the whole tale on its head, the lockdown got the viewers waiting with bated breaths for the show to return to know what happens next. In the meantime, the Kumkum Bhagya actors including Sriti Jha, Mugdha Chapekar and Krishna Kaul have been in touch with their fans on social media, showcasing what they've been up to during this extended home-bound phase.

While Sriti has been busy reading books and watching some great content,Mugdha has been cooking up some amazing and delicious recipes. But that's not it! Our Prachi from Kumkum Bhagya has also rediscovered her old passion. The actress loves to sing and has been working on her sur and taal during this lockdown.

Mugdha a.k.a Prachi from Kumkum Bhagya revealed, “Singing is one of my passions that I’ve been wanting to pursue since I was a child. In fact, before I stepped foot into the entertainment industry, singing was the first thing that I learnt. As a child, I trained in classical singing, but due to my studies, I couldn’t pursue it. I then started to learn acting and entered the entertainment industry a couple of years later, but I never stopped singing till date. In fact, a lot of people who have a good musical knowledge have told me how my voice has a strong base and I should exploit it. So yes, I will continue to sing. I will take classes once again and will keep putting out more singing videos.”

Mugdha has already shared a video of her singing a popular Marathi track, Aabhalmaya, on her social media pages and has promised to share a few more pretty soon. Aren’t you keen on watching our favourite Prachi croon a few songs?

Well, we also hope to see all the stars shooting together in a safe and sound environment pretty soon.