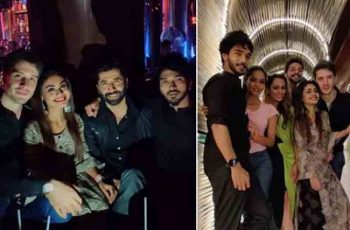 MUMBAI: Nazar is one of the most popular supernatural shows. The TV series has successfully managed to make an audience for itself who enjoy watching the show. Now, the soap has reached a milestone. It has completed a year.

Nazar completed a year on 31 July 2019. The team celebrated their new achievement and even thanked their audiences for all their love. After wrapping up their day’s shoot, Nazar actors including Sreejita De, Ashita Dhawan, Ritu Chaudhry Seth, Sonyaa, Harsh Rajput, Sumit Kaul, and others partied hard. Monalisa who plays the role of Daayan and Niyati Fatnani who essays the role of Pia in the show were missing from the success party.

The team went to a posh restaurant in Mumbai and celebrated their success in a grand manner. They started their celebrations early and were seen cutting a cake.

Check out their pictures right here: