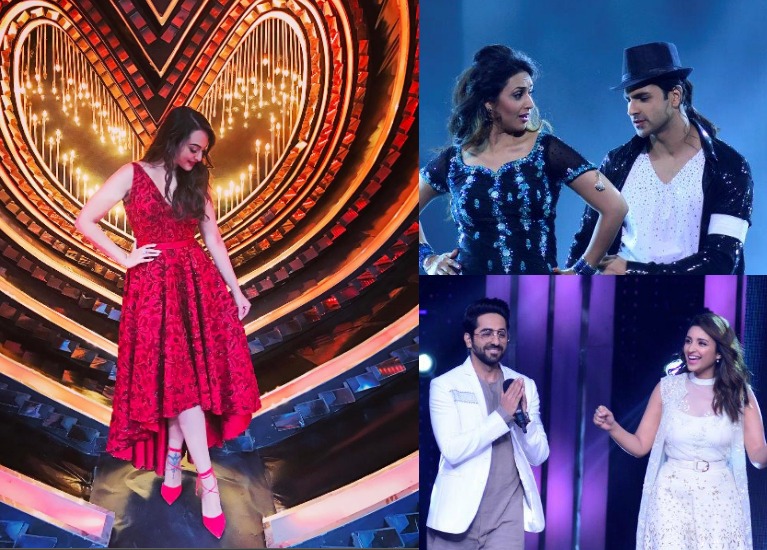 Read on to find out who stole the show!

With its 6th week almost here, ‘Nach Baliye 8’ has been giving out some major style goals. Let’s have a look at all that caught our eye from the upcoming weekend episode!

For starters, we begin with Divyanka Tripathi and Vivek Dahiya as the two did what no one else has. While Divyanka donned an outfit similar to what Madhuri Dixit wore in Aaja Nachle, Vivek gave out a tribute of sorts to none other than Michael Jackson.

Sanaya Irani and Mohit Sehgal’s might turn out to offer a teary-eyed performance this week (or so we think). The two totally complimented each other in the darker shades. Sanaya’s wine colored skater dress and Mohit’s Prussian blue trousers and shirt were simple and yet elegant.

Dipika Kakar and Shoaib Ibrahim took to twinning as they wore a multi-coloured shirt with the latest trend – the ripped jeans. As funny as those orange shoes look, it did go well with the entire look they tried to portray.

The ‘Meri Pyari Bindu’ leads, Ayushman Khurana and Parineeti Chopra rocked the stage in style. Parineeti’s netted white dress made her look like a princess, and Ayushman donned an indo-wester avatar with the kurta coupled with jeans and a coat.

And there she is, our star from this weekend. Sonakshi Sinha charmed us with her red dress! The saying ‘when in doubt wear red’ should be taken seriously by all those who are clueless about the next outfit for the big party.

That’s what we call simple and yet, alluring!

Who’s outfit was your favourite