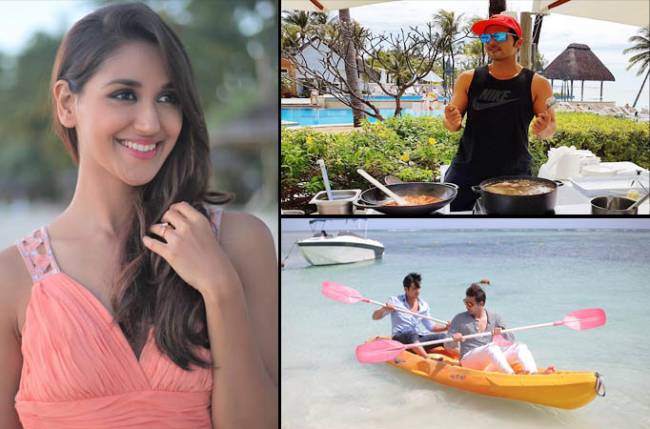 Zayed Khan, Nikita Dutta and Vatsal Sheth had an amazing time while shooting for Haasil in Mauritius. They explored the exotic location and indulged in various adventurous activities such as wind surfing in the pristine waters, scuba diving, yacht rides and many more. Zayed & Vatsal frequently did kayaking and motor-boating in the Indian ocean. The fantastic trio visited multiple picturesque locations such as Le Caudan waterfront, Ambre Sun Resort, Mara Diva and more.
While staying at the luxurious Ambre Sun Resort, Zayed and Nikita also donned the chef’s hat on different occasions and treated the entire crew with choicest delicacies. Nikita, being the fitness enthusiast also took up the onus of teaching yoga to the crew members during breaks. The entire team had a whale of a time in Mauritius and in the recent track the viewers will get a virtual tour of the striking locales of Mauritius.
In the upcoming track of ‘Haasil’, the plot is going to take an interesting twist wherein Ranvir (played by Zayed Khan) offers Aanchal (played by Nikita Dutta) a job in his company and they later fly to Mauritius for a new project wherein they are joined by Kabir (played by Vatsal Sheth). Kabir as always continues to pester Aanchal who is on a secret mission to unravel the truth of the events that have unfolded in the past.