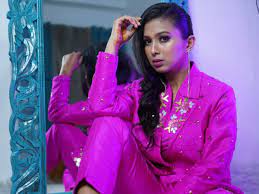 After several rumours about the show going off-air, it turned out to be true. This has left viewers heartbroken.

The star cast had remained tight-lipped about the same. But now, it’s confirmed that the show is bidding adieu to the audiences in a few days.

The news about the show going off-air came as a huge surprise as it had hit the small screens only a few months ago.

And now, as the show goes off-air, We got in touch with Prerna, who plays the role of Elena. Prerna spoke in length about the show going off-air and much more.

Prerna’s character has received lots of appreciation from fans. The actress has been associated with the show since the beginning.

What was your first reaction when you came to know about the show going off-air?

We knew it was a limited series, so we were prepared that it will end soon. But yes, the news makes me sad. This show is very dear to me, and when the production house approached me for the third season, it was an instant yes without a second thought. Today, when I was writing the post for Instagram, I was getting so many messages from fans, and obviously, it becomes my duty to acknowledge them. It hit me that I will never work with the same team again and that makes me more sad. Sadly, as I had my plans to travel, I couldn’t be there for the last day of shoot. I had a wonderful bond with each one of them. I will miss it.

What would be that fondest memory that you are taking from the show?

The Siliguri Shoot Days. Those were the best moments for all of us. I guess I will never ever forget that trip and the masti we did. I am sure I will keep narrating the tales of Siliguri every now and then.

Who would you miss the most from the team of the show?

I am sure I will miss everyone, but I will miss my onscreen saasuma and pati dev more. We three did share really good chemistry onscreen and off screen. My sasumaa really cares for me and always looks out for me, while Vicky always had a joke to make us laugh. He is really funny. So I will miss his jokes and pampering from my saasuma.

KRPKAB is all about the family bond. It shows beautifully that how situation arises in life where family members misunderstand each other, fight, or also act crazy, but in the end they love each other and will stand by each other’s side no matter what comes. I am raised in a family where I am taught to love and be loved, and that makes me even more connected to a show, which have the same values.

The star cast has already wrapped up the shoot a few days ago.