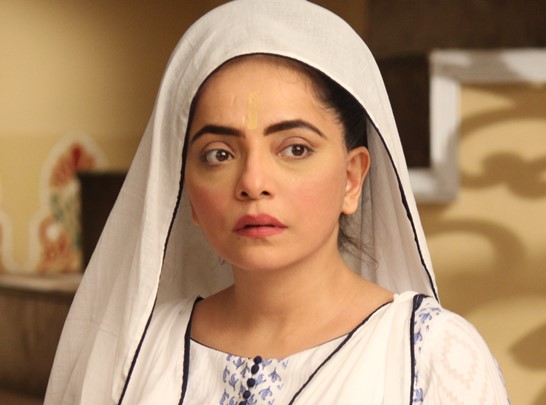 “I hope the audience will appreciate this new contrasting look of mine”- Rakhi.

Rakhi Tandon, who has always been seen in loud, colourful and bright sarees in &TV’s social drama ‘Gangaa’ will now be seen in a demure widow look on the show.

Lately, we saw how Prabha’s husband Ratan is dejected in life and leaves the house without anyone’s knowledge. Subsequently, the family lodges a complaint in the police station. The police inspector informs them that they have found a body along with some other belongings of a person that they suspect to be Ratan. The family later finds out that Ratan is dead.

Prabha (Rakhi Tandon) feels extremely depressed as her son Yash is in the jail and now her husband has also left her. Henceforth, she will be seen donning the widow look on the show.

Speaking on her ‘widow’ avatar, Rakhi said, “Honestly, I have never donned a plain simple, toned down look in Gangaa ever and the track ahead required me to sport a widow look. I have always played full of life and colourful characters. Earlier on the show, I have worn very ‘bhadakeele’ colors, but now the viewers will get to see a sober side of Prabha. In fact, it’s different not only in terms of the look but also in performance. I hope the audience will appreciate this new contrasting look of mine.”