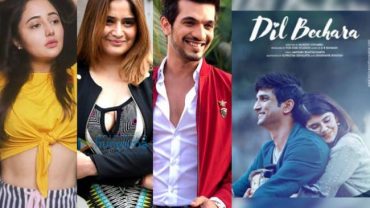 Late Sushant Singh Rajput’s much-anticipated movie Dil Bechara has finally released on Friday, 24th July 2020. The romantic drama that marks his last ever on-screen appearance has received a humongous response from the audience and is already a blockbuster with a rating of 10/10 on IMDb that is a record in itself. Meanwhile, social media is abuzz with emotional reactions on the part of the fans and other celebs from the entertainment industry who have watched the movie.

Numerous TV actors have also paid their heartfelt tributes to Sushant by watching Dil Bechara. Rashami Desai has shared her thoughts on Instagram about the same and writes, “With a heavy heart and tons of amazing memories. Love you Sush!” Arjun Bijlani, on the other hand, has given a glimpse of a few scenes of the movie on Instagram as he watches it with his loved ones. Similarly, many other actors like Arti Singh, Surbhi Chandna, Rohit Roy, Niti Taylor, Yuvika Chaudhary, Sharad Kelkar, and others have shared posts on social media while watching the movie and paid their heartfelt tributes to the late actor.

Dil Bechara happens to be an adaptation of John Green’s ‘The Fault in Our Stars.’ It also marks Sanjana Sanghi’s debut as a female lead who earlier featured in the movie Rockstar. She played the role of Nargis Fakhri’s on-screen sister in the Imtiaz Ali directorial. Coming back to this romantic drama, it also marks the directorial debut of Mukesh Chhabra.