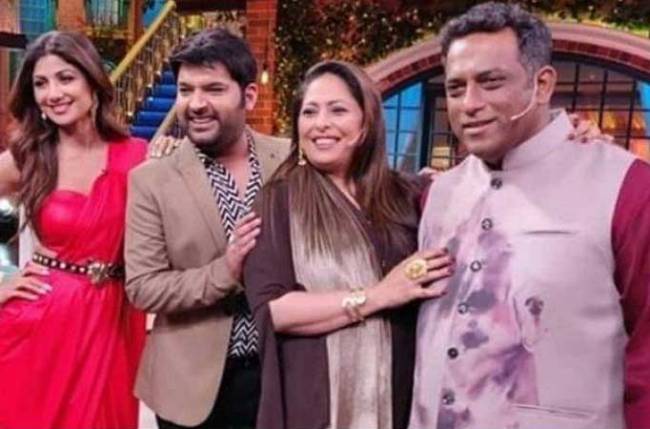 MUMBAI: Comedian-cum-actor Kapil Sharma’s The Kapil Sharma Show is winning hearts of comedy show lovers with its interesting and funny script and the cast’s hilarious antics.

Yesterday, the comedy series started with integration with another popular reality show, Super Dancer. The episode of yesterday saw Bharti Singh and Kiku Sharda taking Shilpa Shetty, Geeta Kapoor and Anurag Basu to be the guest of honour on sets.

As expected, comedy king Kapil Sharma makes everyone burst into peals of laughter with his hilarious questions. He congratulates the judges from the Super Dancer and asks them if they had been invited to any wedding to judge the wedding sangeet anytime. Next, Kapil’s view on Anurag reveals an interesting fact. Well, he tells the filmmaker that he feels he will be that notorious kid in the class who does naughtiness silently and appears to be innocent. To this, Shilpa adds how once Anurag did something like this with her and her sister, Shamita. She reveals that once Anurag had texted her sister from her phone telling that she was pregnant which shocked both the sisters. This revelation leaves everyone in splits. After Anurag, Kapil roasts Shilpa by saying that she puts pictures of sweets on social media with the aim of keeping all the ladies’ fat in India so that her husband’s attention remains on her.

How can Geeta be left behind? Everyone also teases her. Shilpa tells Kapil that they are looking for a suitable groom for her. Geeta smartly responds by saying that Siddhu is the benchmark of the kind of groom she is looking for. Her words make Siddhu blush, while Kapil pulls his leg. Soon everyone gets a melodious treat when Kapil croons some songs for Geeta.

The episode ends on a beautiful note with a stunning performance by the contestant of Super Dancer, and with Kiku, Kapil, and Bharti’s skit.