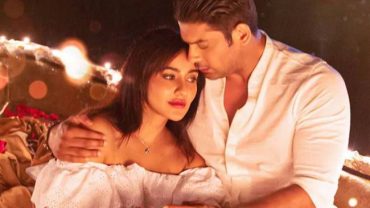 Sidharth Shukla fans are waiting with bated breath for the release of his upcoming song, ‘Dil Ko Karaar Aaya,’ with Neha Sharma. The song is all set to drop in on July 31 (2020). With only two days left for Dil Ko Karaar Aaay’s release, the excitement of fans is of top-notch. Now to add to fans’ curiosity, a new BTS picture of Sidharth and Neha has been doing rounds on social media. The romantic photo is being spread like wildfire and has created a storm on the internet.

It is a monochrome photo, wherein Sidharth and Neha can be seen sharing a romantic moment, and it gives us a glimpse of their firey chemistry. Though the image is black-and-white, one can make out that Sidharth and Neha are wearing the same attire as their second poster. While Sidharth looks dashing in an all-black outfit, Neha is oozing oomph in her high-slit red dress. Sidharth is seen gently holding Neha in his arms, and it is a treat for fans to watch their firey chemistry.

This is the first time that Sidharth and Neha will share the same screen, and everyone is excited to see what magic does this new pair bring. Neha Kakkar and Yaseer Desai have given their beautiful voices to Dil Ko Karaar Aaya. Rana has penned down the lyrics, while and the music is composed by Rajat Nagpal. The shooting of the song was done in Della Resorts, Khandala.