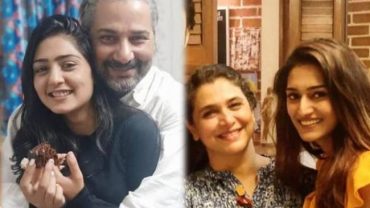 While acting certain characters , actors not only become friends with one another on television but also establish a comfort level.

Playing father and daughter, Varun Badola and Anjali Tatrari, who are presently seen in Sony TV’s show Mere Dad Ki Dulhan are winning hearts with her powerful performance in the show along with Shweta Tiwari in the lead roles.

Anjali who plays the role of Niya is beautifully portraying her character and doing complete justice to it. Her bond with Amber played by Varun is amazingly shown in the serial and they have given us major father-daughter goals. Anjali and Varun share a great bond off-screen
as well and their social media accounts are proof. Both have always shared some amazing moments from the sets of the show which are a treat to watch. While An jali and Varun’s bond in the show has given us major goals, their off-screen bond too shows that they are the best baap-beti jodi.

On the other hand, Erica Fernandes has impresses one and all with her charm ever since she made an appearance on television.

Her show Kuch Rang Pyar Ke Aise Bhi, with Shaheer Sheikh and Supriya Pilgaonkar in the lead roles, was much loved by the audience. While the chemistry between Shaheer and Erica was so engaging that it washard to believe that the duo are not dating in real life, the drama between the characters enacted by Surpiya and Erica was also an interesting watch. How Sonakshi dealt with an over possessive mother and maintained her independent identity was loved by the audience who believe in modern living and also gave off a few tips to all those girls facing such issues in their marriage.

Their chemistry was something worth watching. And somewhere we feel that such characters bring to life the hidden or suppressed emotions of the audience as the chemistry and content is very relatable. There definitely should be more shows like these in future…