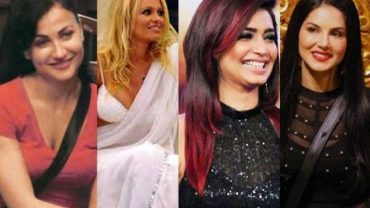 Bigg Boss is the rip off version of the Big Brother. The show became everyone’s favorite because of the format.

The show has the basic concept of locking up dozens of celebrities into a room so that they can entertain us by their interactions.

However, they often tried to do things differently, and they do it by inviting commoners in the shows, making them in pairs, or sometimes inviting contestants from foreign countries to raise the show’s TRP.

Jason Shah participated in the 10th season of Bigg Boss as a wild card entry.

He is a British-Indian actor and a fitness model. He failed to leave an impact on the audience.

Mandana Karimi’s real name is Manizeh Karimi and she is an Iranian-Indian actress. She has done modeling projects all around the world.

Ali Saleem is popular as his alter-ego name Begum Nawazish Ali. He is a famous Pakistani television host, scriptwriter, impressionist, and actor.

Elena Kazan is a German-Russian actress who features in German as well as Indian films like John Day, Agent Vinod, etc.

Elli’s full name is Elisabet Avramidou Granlund. She is a Swedish Greek actress and featured in many Bollywood movies.

Sunny Leone is an Indian American actress. She was the sensation when she entered the Bigg Boss House in season 5.

The Serbian beauty made her Bollywood debut with the Movie Satyagraha. She got initial fame when she appeared in the Bigg Boss season 8 and was in the house for a month.