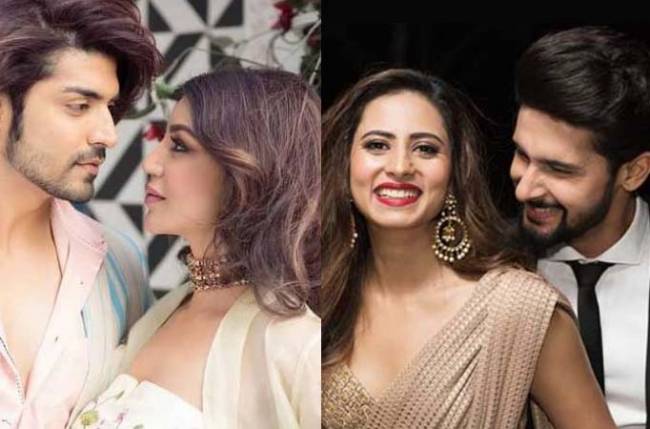 The Indian telly world is full of couples who not only look perfect together on-screen but have amazing chemistry and bond even in real life. Many couples in the TV industry fell in love with each other while they worked and ended up being together. They are so adorable that one can never get over their love and might even end up feeling like you want to be in love as intense as theirs. While there are many cute and adorable real-life couples in the industry, here are some who might even make you jealous of their never-ending love.

Have you ever seen a couple as cute as Ravi Dubey and Sargun Mehta’s? The two met on the sets of their show 12/24 Karol bagh and gradually started liking each other. They started dating soon after the show and even did Nach Baliye together. Ravi took Sargun by surprise when he proposed marriage to her on the sets of the dance reality show. She said yes, and they got married in December 2013. The couple is highly active on social media and keeps sharing adorable videos and photos. They are so cute that they can make you fall in love with them instantly.

The adorable couple of Karanvir Bohra and Teejay Sidhu are so in love that they cannot ever get bored with each other. The couple got married in 2006 and have twins together. Moreover, both of them are now expecting their third baby. They keep sharing pictures and quirky videos, and all of those are a must-watch.

The newly-wed couple of Neha Kakkar and Rohanpreet Singh (adorably referred to as ‘NehuPreet’) is melting our hearts with their charming wedding pictures. The couple who recently announced their relationship and soon tied the knot on 24th October, has taken hearts away with their chemistry in a very less time.

Prince Narula and Yuvika Chaudhary are the living testimonies of the fact that couples are not only made in heaven but in the Bigg Boss house as well. Prince and Yuvika met in the reality show, fell in love, started dating and eventually, tied the knot in a grand wedding ceremony in 2018. They are madly in love with each other, and it shows anywhere and everywhere. They keep their social media updated with not only their professional but personal stuff, too, and their notes for each other are simply adorable.

Divyanka Tripathi and Vivek Dahiya did not have love at first sight, rather they took some time to discover a connection. They met on the sets of Yeh Hai Mohabbatein and gradually found each other interesting. But love-struck them after their fans had started linking them up together. Later both fell in love and got married in a celebrated wedding affair. Their chemistry is what one desires for.

The ‘Ram-Sita’ couple of the television industry (Gurmeet Choudhary and Debina Banerjee) share an amazing bond and capture several hearts with their love and relationship. The two had met even before their show together. They dated for almost five years and then Gurmeet had proposed Debina in a reality show. Finally, they got married in 2011. Both of them are very active on social media and keep sharing their fun moments, and we tell you that it is hard to find a partner like them.

Meanwhile, Nakuul Mehta and Jankee Parekh’s couple is touted to be the most adorable one in the telly world. And their love story is simply the best thing that couple ever happens to anyone. They were childhood friends and are married today, after sharing every moment of their lives. And today, they are expecting their first baby. The couple just announced their pregnancy in an immensely cute manner, and we could not keep calm but simply adore both of them. Now, will you believe in ‘meant to be’?

The lovely couple of Anita Hassanandini and Rohit Reddy, who is eagerly waiting for their first baby, can take your breath away with their ecstatic love. Anita and Rohit have now been married for almost seven years. And their kind of love and togetherness is what everyone wishes for.

The much talked about couple today is of Gauahar Khan and Zaid Darbar’s, who are gathering all the love right now with their engagement announcement. The much in love couple who recently came out with their relationship is all set to tie the knot in December. And their lovely pictures together that keep coming up every day are already giving some major couple goals.

The stunning couple of Kishwer Merchant and Suyyash Rai met and got along with each other on the sets of their show Pyaar Ki Yeh Ek Kahaani. It is known that the two used to spend a lot of time on-call after shooting. They finally decided to get married and tied the knot in 2016. Kishwer and Suyyash have really impressive chemistry, and both look truly amazing with each other.

Divya Agarwal and Varun Sood are surely giving some great couple goals to all the unmarried and madly in love with each other couples out there. Though, they had met quite a few times before they fell in love during the reality show Ace of Space and confirmed that they are dating. And one thing is for sure they are deeply in love with each other. Always supporting each other with whatever comes their way, which is endearing.

Sanaya Irani and Mohit Sehgal met on the sets of Miley Jab Hum Tum and fell for each other and became a real-life couple from the reel life couple. Their chemistry got much adored by their fans, and their love grew. Sanaya and Mohit got married in 2016 and are living happily ever after.

Jay Bhanushali and Mahhi Vij are now the parents of a cute baby girl and two other foster kids. They are all about fun and love. They have now been married for almost nine years but are still as lively and as lovely as ever before.