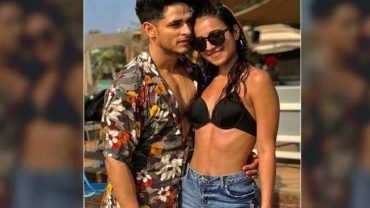 Priyank Sharma and Benafsha Soonawalla are popular faces of TV world. They are loved by their fans. They have a loyal fan base and one that dotes over them. Ever since they participated in the controversial reality show Bigg Boss 11, they have remained in the media glare and now they have made their relationship official after two and half years of being seen on national TV. Their fans are not missing out on a single act of love by them.

In her latest Instagram post, Benafsha is seen showing some dance moves and credited boyfriend Priyank Sharma for the shoot. As soon as the video went up their fans and friends started commenting on it. But the reply to Priyank’s comment made by Benafsha herself is sugar sweet to read. As Priyank on the video wrote, “Thanks for the forced credits” To which she replied, “@priyanksharmaa my rasmalai”.