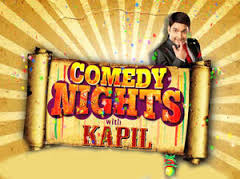 Comedy Nights with Kapil is an Indian comedy show that airs on Colors TV channel. The show is hosted by comedian Kapil Sharma. The format of the show is mixed, with Sharma acting out skits on stage with supporting characters, while also interacting with members in the audience and permanent guest Navjot Singh Siddhu. Each episode features celebrity guest(s) who usually appear to promote their latest films and with whom actors interact in-character. The show is similar in context to the British show The Kumars at No. 42.

The show was launched by Kapil Sharma under his own banner called K9 Productions. For a period of 3 months (October – December 2013), show was telecasted on a weekly basis only to accommodate the show 24 (Indian adaptation of the American television series of same name). With completion of 24, telecast was again restored to a biweekly schedule.

After the conclusion of Jhalak Dikhhla Jaa, the show became India’s highest rated serial in the non-fiction category garnering viewership rating greater than KBC and Big Boss. Moreover, in the history of reality shows, it is only on Comedy Nights thatShahrukh Khan has visited the sets twice to promote a movie Chennai Express