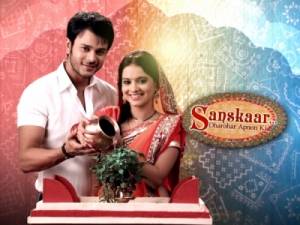 Sanskaar – Dharohar Apnon Ki is the story of Jai Kishan, the dedicated and cultured son of the Vaishnav family that lives in Keshavgarh. He wants to stay with his family, but situations force him to leave his home and got to the US. The show will deal with his stay in a foreign land, and how he keeps his tradition close to his heart even when he’s away from his homeland. Jai Kishan Vaishnav’s journey to US has not been so fruitful for him till now. However, his expedition becomes joyous as he meets another Gujarati, Urmila Patel at a Lord Krishna temple. As fate would have it, his struggles continue with the loss of his luggage.Looking for his missing luggage, Jai Kishan reaches the office where he has to join. On the other hand, a policeman informs the Vaishnavs that burning of their mill was not an accident. Meanwhile, Jai Kishan struggles to join his job without the documents. To face a strict boss adds to his troubles.

Jai Kishan reluctantly receives the call of his family, but lies to them and hides his pitiful condition in a foreign country. He gets into trouble as police catches him without passport, but a young Muslim man, Shaukat from India saves him. Jai Kishan decides to announce on radio about his problem. On the other hand, Vaishnav family financially supports one of their employees in getting his daughter, Bharti, married to an affluent family.Finally He gets Back the passport and all his documents from Bhooomi, Urmila’s Grand daughter. And he joins his job. But he forgets to collect the passport from Bhoomi.

Jai Kishan is suspected to be a terrorist after being found without a passport and gets arrested by NYPD. Meanwhile, Bhoomi finds his passport and rushes to give it to him. At one hand, Kishan’s mother prays to Lord Krishna to keep her son away from trouble, and on the other hand, Bhoomi comes to his rescue with his passport and gets him out of the lockup. When Urmila comes to know that Jai Kishan has been thrown out of Shaukat’s house by his landlord, she generously brings him to her house. Meanwhile, Bhoomi prays to Lord Krishna to meet Jai Kishan once more, and her wish comes true instantly as he rings the bell of her house. Bhoomi gets shocked to know that Kishan has come to stay with them. Bhoomi and Urmila Patel makes Kishan to stay in their house without the knowledge of Gayatri, Bhoomi’s mother. But when she comes to know about this she get angry but allows Kishan to stay in the house for 7 days. Bhoomi and Kishan work together in Gayatri’s office and fall in love for each other in due course.

Gayatri hates Indians because of her past bad experiences in life. But Urmila Patel wants Bhoomi to marry to an Indian. She understands Bhoomi’s love for Kishan. But Gayathri wants Bhoomi to be married to Rammy, an American born Indian. Gayatri insults Kishan at Rammy’s party due to which Bhoomi gets hurt and confesses her love for Kishan in front of everybody but Kishan says that he has a lot of responsibility and no time to love. Kishan leaves Bhoomi’s house. But Gayatri fires Kishan the very next day and also cancels his work permit with the help of Rammy due to which he will be forced to leave U.S. within 36 hours. Bhoomi challenges her mom to stop Kishan in U.S. and finds a solution as marriage. Kishan initially does not agree with Bhoomi by later confesses his love for Bhoomi but wants the permission of his family for marriage. At the same time Bharti’s marriage gets called off due to imitation jewels bought by Ketki. Ansu baa fixes Bharti’s marriage with Kishan. In some urgency and miscommunication Kishan thinks that their family accepted his marriage and marries Bhoomi.