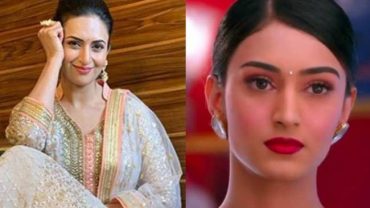 Kasautii Zindagii Kay fans recently got a shock as the news of lead actor Parth Samthaan quitting the show was revealed. Parth, who plays the role of Anurag Basu in KZK has decided to opt-out as he wants to focus on his health and other projects. Not only Parth, but gossip mills are also abuzz that Erica Fernandes aka Prerna is also planning to bid goodbye to Kasautii Zindagii Kay. The news of Parth and Erica deciding to quit the show has certainly come as a major shocker for the duo’s fans, who loved their onscreen chemistry and bond.

While Parth and Erica’s exit from Kasautii Zindagii Kay has not been confirmed yet, the rumours of Divyanka Tripathi being roped in the show has already surfaced. However, just a few hours ago, Divyanka Tripathi Dahiya took to her social media handle to react on the news of her replacing Erica Fernandes as the ‘new Prerna’ in Kasautii Zindagii Kay and called it a ‘rumour.’ She clarified that she is not doing the show, and everything is rumour with a message on her Instagram handle. Divyanka wrote, ‘DTD as Prerna in KZK? It’s a rumour! Just clearing the air for those who care.’

Reportedly, Parth has already given his notice to the production house (Balaji Telefilms) and will shoot for the KZK till September 10 or 11. Erica is also is planning to put down her papers. Apart from them, Sahil Anand, who plays the role of Anupam on the show, has also decided to move on to take up other projects. Earlier, Karan Singh Grover was replaced by Karan Patel as Mr. Bajaj and Aamna Sharif had stepped into the shoes of Hina Khan on the show.

Divyanka Tripathi was last seen in Yeh Hai Mohabbatein as Dr. Ishita Bhalla opposite Karan Patel. The show bid goodbye to fans in December last year after a successful run of 6 years. Earlier there were also rumours that Divyanka will be a part of Ekta Kapoor’s supernatural drama Naagin 5, however, she rubbished those speculations as well.