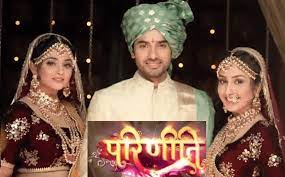 MUMBAI : Colors’ new show “Parineetii” is doing well. The audience loves the show and they are connected to the stars of the show. The show stars Ankur Verma, Tanvi Dogra, and Anchal Sahu in the lead roles. The show focuses on two best friends who end up marrying the same guy.

Earlier, Parineet saves Rajeev again from getting exposed by Gurpreet. The latter lashes out at Rajeev for betraying Parineet.

Neeti learns about Rajeev being Sanju and feels heartbroken. Therefore, she decides to cut her ties with him, despite Parineet’s requests.

Later, Parineet stops her mother from revealing anything to Neeti as she is pregnant.

Her mother agrees to not say anything but one condition that Parineet moves on from Rajeev and gets married again.

Parineet gets shocked and immediately refuses. However, when her mother forces her, she agrees as she has no other choice.

Soon, Gurpreet starts searching for a prospective groom for Parineet.

Now Tellychakkar is here with the latest update about the show.

As the story progresses with Parineet’s parents finding another man for Parineet to get married to, soon things are going to change in a major way.

According to our sources, the show Parineetii is soon going to take a time leap and surely the upcoming story is going to be more exciting for the viewers.

It’ll be interesting to see how Rajeev will manage both Parineet and Neeti and how Neeti will deal with Rajeev.

What will this time leap bring with it?

Are you excited for the upcoming episodes?