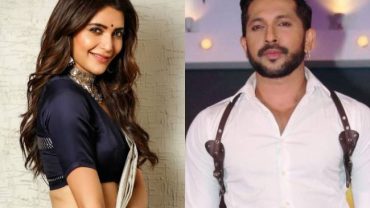 Khatron Ke Khiladi 10 contestant Karishma Tanna is one of the most popular television actresses. She has acted in many serials and impressed the audience with her acting chops.

The actress just recently had to undergo a painful toe surgery to avoid any further infection amidst the lockdown. The actress had an infection due to her nail in-growth and hence had to undergo surgery on an urgent basis. However, as the actress is all pink in her health, she is back to her basics and that is making TikTok videos. Karishma has been making several videos on TikTok while entertaining her 4.3 million fans. Interestingly, this time she did a duet TikTok with choreographer Terence Lewis and their recent video will leave you in splits.

In the video, at one side, Karishma is seen applying lipstick on the other side, Terence is seen eating popcorn and questioning her on why she is applying makeup, to which she responds that it was TikTok. Terence again interrupts her and she loses her cool as she yells at him saying, ‘Let me put on my make up.’ While sharing the video, she captioned it as, “Let me put on my make up. Duet with my dear friend @terence_here #tiktok #makeup #quarantine”

Terence too shared the same video while complimenting her beauty as his caption read, “Jokes apart, this has actually happened! @karishmaktanna you agree?! Ironic though, given ur genetics, you need the least and that’s a backhanded compliment girl!! #yehladkipagalhaipagalhai #bollywood #hollywood #auditionsalert #actor #timepass” Responding him on this message, Tanna commented, “Heheheheh Thanku my buddy.”