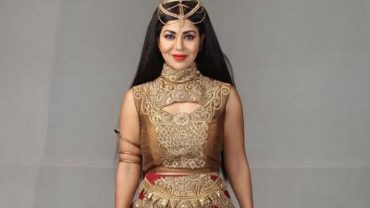 1. How does it feel like to be a part of Sony SAB’s Aladdin- Naam Toh Suna Hoga?

It is great, coming back to my almost home channel as I started one interesting phase of my career with Sony SAB’s show Chidiya Ghar. I’ve had a very long association with Sony SAB through Chidiya Ghar, Yum Hain Hum and Dr. Madhumati and it’s like my comfort zone. I already have an audience base on this channel and it feels great to be coming back to them. Additionally, coming back with Aladdin- Naam Toh Suna Hoga is another high as this show has a humongous audience base and the actors are extremely young and fresh. It will be a different experience for me to be working with such co-stars and I’m excited for this role.

2. Why did you accept the role of Mallika? What was your reaction when you were approached for this role?

Firstly, I was very happy on hearing that Sony SAB is again considering me for something interesting. I accepted the role of Mallika because it is a larger-than-life character. When you are entering a show mid-way, it is very easy for your character to get lost in the crowd because everyone is already established in the show. The moment they were explaining the character to me, I understood that the character is clearly etched out differently, to stand out from the rest and it will be interesting to be playing such a character. I haven’t played the character of a villain on Sony SAB so that in itself is going to be a different experience.

3. Tell us something about your character, Mallika.

Mallika is an intelligent, cunning and a beautiful villain who is also the biggest Jinn creator. Usually, people feel that villains will be dangerous-looking. However, Mallika is a very glamorous and confident villain, someone who wouldn’t behave like a villain but still be manipulative enough to get what she wants. Mallika has been brought to life with immense care and thought. The mere look of the character speaks volumes about her significance in the show and everyone will be able to tell how vital the role of Mallika is going to be. She has so many layers to her personality to play with and I feel Mallika will be a character I will always remember.

Mallika’s character is larger-than-life and so is the costume. We have various costumes for Mallika and all of them are different from one another. It is very difficult to manage such dresses with the huge frills. While I was doing the trials as well, I thought it will be difficult to wear this costume and shoot scenes every day. On the first day itself, there were 3 people assigned to just carry the dress along with me. While shooting a scene, I even fell down as the dress got stuck while I was supposed to climb down the stairs. So, every day we are trying to figure out how to get comfortable with this costume and it’s a joint effort as everyone on the set is working hard on this character and its look.

5. Did you do any specific preparations for this role? Any challenges that you faced while performing the role of Mallika?

I haven’t done any specific preparation and I never actually do. I’m a very spontaneous actor. Everybody has a different way of acting and mine is ‘on the set’. The director explains something to me, I absorb it like a sponge at that moment and then I deliver it. My first shot is always the best shot. Whatever comes out in the first shot is always very natural and I have observed this in my case, over time. I always believe that the moment you start taking reference, you are not able to deliver it originally or with a newness. I have been following this formula from the beginning days of my career.

6. What are your thoughts on playing negative characters?

I am an actor and I believe that’s what I ultimately am. Being an actor, you can’t say that you want to do particular kind of roles. With me, I try to see the potential of the role and then decide whether I would like to do it or not. The moment I feel my character is getting stuck somewhere, I would rather not play that role. So as long as my character has a potential, I am happy to play any kind of role. Acting gives an opportunity to portray various characters, something that I am not in real life. If I portray only positive characters, it becomes too monotonous for me because positive characters in television are very similar to each other. On the other hand, grey characters give an opportunity to try many new things. I don’t think any other television actress has explored the number of genres I have on television. From playing Sita to switching directly to comedy and then to play a goddess with comic nature in Yum Hai Hum, was very difficult but the audience loved me in that role. Now, with Mallika in Aladdin- Naam Toh Suna Hoga, it will be really exciting for the audience to see how I try to match my energy with a fairly younger set of co-actors.

7. How has the experience been shooting on the sets of Aladdin- Naam Toh Suna Hoga, with the entire cast and crew?

As of now, I’ve only shot alone because Mallika lives in a different world so it has been all green, chroma shots, full of imagination. I’ve shot with Siddharth Nigam and Smita Bansal for the promo and I found both of them very sweet. I am eagerly waiting to work with the other members of the cast as well However, there are so many people in the crew that I already know and have worked with in the past. Some of them have worked with Gurmeet (Choudhary) and they know me. So, they are very protective about me on the set and it feels really great to witness that kind of affection and to be working with such a lovely unit.

8. The show has been running successfully for more than a year now. What should the viewers look forward to with Mallika’s entry in the show?

The viewers can expect more drama with Mallika’s entry, who is here to disrupt everyone’s life. The viewers had been seeing Zafar and they have loved the character. The moment you see people are loving a villain, it means the actor is doing an amazing job with the character. So, I’m waiting to explore myself with Mallika’s character and I’m sure the audiences will also not be disappointed.