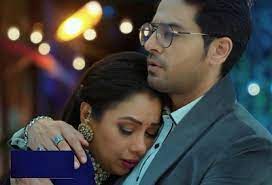 MUMBAI: Imlie has done well on the TRP charts since it hit the screens.

While shooting we see that Rupali and Gaurav are busy in their own banter and Arjun says they have their own episode happening out there as they find love in those small pillows around them. Rupali then hits Gaurav with a pillow while they are facing the camera.

Anupamaa becomes the first show to qualify and Pandya Store is the last one beating Yeh Hai Chahatein. Amid the romantic performance, Arjun Bijlani reveals that Gaurav Khanna aka Anuj is the ladies’ man in the show. He is often seen enjoying himself with Imlie, Sai and all the other Bahus, he even expressed his adoration towards Vaani Kapoor. Anupamaa hence reveals that Anuj is indeed the ladies’ man but he is loyal to her.

In the Patni Vs Pati episode, Arjun will dare the ladies to carry their husbands in their arms and the strongest turns out to be Sai and Akshara for sure, Akshara carries Abhi with such finesse while Sai smartly carries Virat on her back.

As we had exclusively revealed that Bharti and Harsh are all set to grace the show and now, Bharti dares Abhimanyu and Aryan to show their abs while Akshara being the possessive wife runs behind to cover him with his coat, but Arjun keeps trying to stop her. After a dance battle with Bharti, she calls them both the winner for having such fit and attractive bodies. You wouldn’t want to miss out on this cute and hot episode:

Are you all excited about the upcoming episodes of the show?