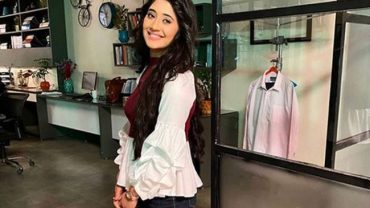 Shivangi Joshi is one of the most popular television actresses. She has impressed the viewers with her acting skills and style statements. She is currently winning hearts by playing the female lead role in Yeh Rishta Kya Kehlata Hai.

After winning hearts with her acting talent, Shivangi is also known for her style statements. She is quite active on Instagram wherein she has 2.7m followers. She makes sure to remain in touch with her fans by regularly sharing posts. Her page is filled with some of her fun-filled pictures and she keeps her fans updated on what she is doing. The audience loves her chemistry with Moshin Khan, and their fans fondly call them Kaira.

Now apart from acting the actress is fond of dancing also. We came across a throwback video which Shivangi had shared where she is seen dancing away with her choreographer Himanshu Gadani. She shared the post and captioned it saying date with Shivangi. The actress in many of her interviews as said that she loves to dance and after acting, if there is something that keeps her happy is dancing and whenever she has time she takes out and dances on any tunes.

Fans have commented saying that she is a lovely dancer and she should now do a dance reality show.

Well, there is no doubt that Shivangi is an exceptionally good actress.

For more news and updates from the world of Television and Movies stay tuned.