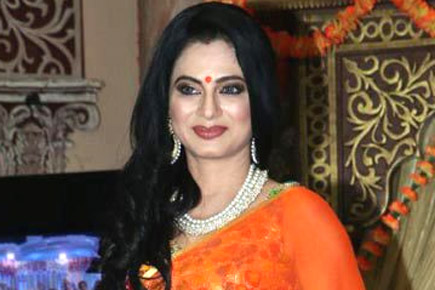 Sassy, sophisticated, and beautiful, the newest vamp on TV, Tasneem Sheikh aka Sindoora Mittal from Ek Vivaah Aisa Bhi is indeed multi-talented! Firstly, she has been balancing pretty well between being a full-time mom and a full-time actress. Secondly, she has made sure that she has a say in the important aspects of her character Sindoora.

Tasneem believes that acting is not just about dialogues, but about how the entire character unfolds itself to the audience. According to her, the body language, the behaviour, and the costumes too make a huge impact on how the audience perceives a character. Keeping this in mind, Tasneem made sure that she herself chooses and designs the Sarees that she wears. Sindoora’s look in Ek Vivaah Aisa Bhi is simple, yet classy – a look not undertaken by most of the vamps on TV. Negative characters are usually perceived as the ones wearing heavy Sarees, loud makeup, and tons of jewelry, but Tassnim did not want Sindoora’s character to be that way.

“Sindoora Mittal is not your usual run-out-of-the-mill character. She’s a sophisticated woman, who cares mainly about her status and her class! Keeping this in mind, I wanted a look that would fit into the criteria. I sat with our costume designer Salma Mansuri and with Nivedita Basu, and we discussed how the character would look. Personally, I don’t like prints. Hence, Sindoora’s Sarees are mainly simple. The jewelry too, is light yet classy. I wanted a look that I could carry, and right now, I’m completely satisfied with it,” says Tasneem.

Tasneem has worked really hard, and with all her soul to make her comeback on Indian Television memorable, it surely seems to be having an impact on the audience’s mind. In the coming weeks, we’ll see more layers of Sindoora Mittal coming out to the audience.