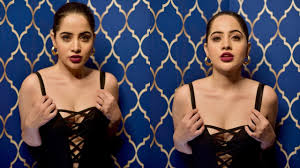 Urfi Javed has been seen in quite some television shows and we have loved her immensely however, she gained immense fame and was in the spotlight during and after her stint in Bigg Boss OTT, which culminated recently.

During the course of the show, the audience saw how when there was lack of availability of clothes and the contestants had to dress and surprise the audience, Urfi used thrash bags and converted it into a beautiful one piece dress. But ever since then, out of the house, she has been wearing clothes which are all about skin show.

We feel Urfi believes that worrying about what other people think is less essential than wearing what you want. She has a distinct style and frequently wears backless clothes. However, not all netizens are happy to see her dressed in such a way. The comment section turns into a troll party every time she wears something deemed ‘questionable’.

Urfi has this time taken to her Instagram and shared a reel in which she can be seen flaunting her backless outfit.

What are your thoughts on the same? Let us know in the comments below!