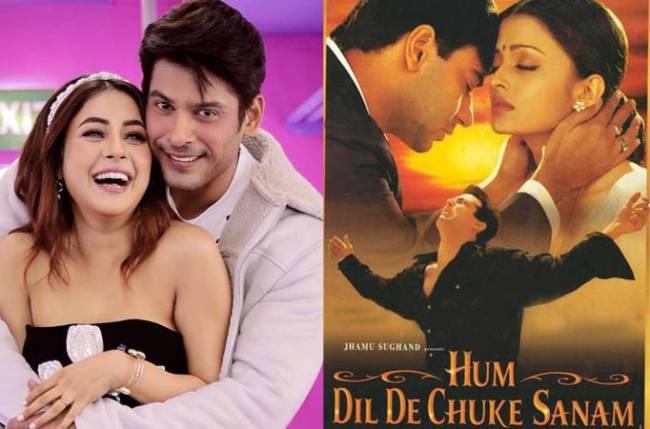 Siddharth and Shehnaaz’s friendship was loved by the audience. It all began in the Bigg Boss house (Bigg Boss 13), and they fondly call them Sidnaaz.

Their relationship was special in many ways, as they used to fight a lot and then quickly patch up.

Whenever they had problems and we’re not talking to each other, fans started to trend the hashtag #wewantsidnaaz back. The duo made a place in the audience’s hearts and have many fan clubs.

Their fans keep posting their photos and videos online. Viewers miss watching them together, and when Siddharth came on Bigg Boss 14 as a toofani senior, the audience missed watching Shehnaaz along with him.

The two also appeared in music videos Bhula Dunga and Shona Shona, which are creating history when it comes to viewership.

Even today, the two stand by and defend each other in the media as they are best of friends, and fans love watching them together.

Now, one of the fan clubs shared the poster of Hum Dil De Chuke Sanam and morphed the photo of Salman Khan and Aishwarya with Siddharth and Shehnaaz as they want them to be a part of the second installment of the movie.

Fans have commented saying that they would be the best choice for part 2, and there is no doubt that the movie will be a huge success at the box office.

This is not the first time fans have morphed SidNaaz’s photo in a movie poster.

Netizens are waiting for the two to come in a project as they have become an iconic on-screen pair.

Fans have also commented saying that the two are a perfect pair and it is high time they start dating each other.

Well, the love for Siddarth and Shehnaaz hasn’t decreased, and the two still have a massive fan following.

On the work front, Shehnaaz will soon be seen in a web series and Siddarth in ALTBalaji’s Broken and Beautiful Season 3.