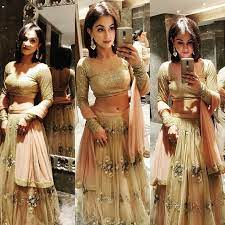 The actress is seen playing the role of Brinda in the show and is paired opposite Ajay Nagrath.

Viewers are in awe of Aanchal’s performance in the show.

We got in touch with Aanchal, who spoke at length about her character in Bade Acche Lagte Hain 2 and much more.

After being a part of reality shows like Roadies and Mujhse Shaadi Karoge, would you like to try Khatron Ke Khiladi and Bigg Boss? If yes, which one would you choose and why?

And Bigg Boss is something I want to do but not now, probably after two to three years. Right now, I want to do Bade Achhe Lagte Hain for the next five to ten years.

Viewers are loving the cute nok-jhok between you and Aditya aka Ajay Nagrath. Tell us about your bond in real life.

I love my nok-jhok scenes that come with him. I love the on and off-screen vibe. Aditya is a darling off-screen. I am in touch with him even when I am not shooting with him. He is very caring. I was unwell once and he used to message me and ask me to have haldi wala dudh. You need a kick to come to the set every day because it becomes extremely monotonous. So for me, that is the team. We all eat together. The show’s cast is very good and the bonding is great.

If not an actress, what would you have been?

Aanchal has previously starred in projects like Savdhaan India and Roadies, where she emerged as a winner for Season 8, Meri Saasu Maa, Sapne Suhane Ladakpan Ke, and Roop – Mard Ka Naya Swaroop.