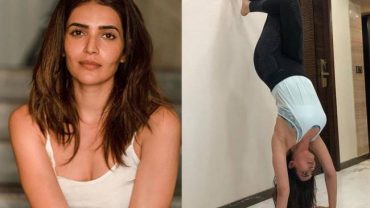 Actress Karishma Tanna, who got operated for an ingrown nail amid the nationwide lockdown, did the inverted yoga pose with her injured foot.

Karishma took to Instagram, where she shared a photograph of herself doing the complicated yoga pose, but this time taking the help of a wall.

“Can’t stop Won’t stop #nopainnogain #strength#yogapractice #quarantine,” she wrote alongside the image, which currently has over 176K likes on the photo-sharing website.

She later took to Instagram Stories, where she shared a photograph that shows her baking muffins.

She wrote on the image: “Trying to bake banana muffin… Though I am one short. Hehe.”

Earlier, Karishma, who is known for her roles in TV shows like “Naagin”, “Kyunki Saas Bhi Kabhi Bahu Thi”, “Naagarjuna: Ek Yodha” and “Qayamat Ki Raat”, took to Instagram Stories and shared a video of herself and the doctor bandaging her toe.

On the work front, she is currently part of the action reality show “Fear Factor: Khatron Ke Khiladi 10” (KKK 10), which has been shot in Bulgaria.