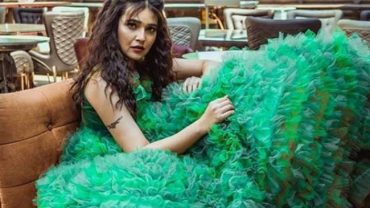 Mansi Srivastava is a popular face of the Telly world. The actress has a number of hit shows to her credit. Mansi is one talented diva and has delivered some stellar performances in her shows.

The actress is quite popular among the fans, especially for her role in Ishqbaaaz. Mansi played Bhavya Pratap Rathore and was paired opposite Leenesh Mattoo in the show. Fans loved Mansi and Leenesh’s on-screen pair.

Mansi was last seen in Colors’ popular drama series Vidya. The actress had entered the show just a few months ago and only shot for a few weeks. Due to the COVID-2019 pandemic, the show’s shooting was halted on a temporary basis.

However, the actors took to their Instagram account to share the news about Vidya going off-air. This definitely left the viewers heart-broken. Namish Taneja and Meera Deosthale penned a heartfelt note and thanked everyone.

And now, Mansi shared an Instagram post where she posted the last picture she took on the sets of Vidya. The actress revealed that she had shot for the show for just 20 to 25 days and was looking forward to it.

The actress penned down an emotional note as she bids adieu to the show and the star cast.

Mansi played the role of Mehak in the show and viewers loved her for it.

Well, the fans are definitely going to miss the show!