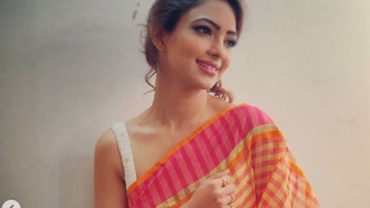 On Saturday evening a fire broke out on the sets of KumKum Bhagya in Mumbai. Thankfully, no injuries were reported even though the fire was a major one. However, Pooja Banerjee who just recently joined the cast as Rhea (Shabir Ahluwalia and Sriti Jha’s daughter) was extremely disturbed with the incident. The actress was seen crying after the accident took place.

Pooja said, “The day fire broke on the sets I was shooting for KumKum Bhagya till afternoon and after wrapping my scenes, I went to Kasautii Zindagii Kay 2 sets which are just next door. And I couldn’t stop my tears as I saw the set catching fire, in front of my eyes. I was the only person who was crying. My family wanted me to rest for some days and then get back to work looking at the pandemic situation outside, but I had convinced them saying that there are a lot of people who are jobless right now, so if I have work, I don’t want to lose out on it. The very first day I joined Kasautii Zindagii Kay 2 shoot after lockdown, Kumkum Bhagya offer came my way. So I got all excited as I get to be part of two big shows and that too with all conviction as we shoot in the same compound. As both the shows belong to Balaji Telefilms, I have the same makeup room also.”

Pooja goes on to add, “Then in no time Parth Samthaan (Anurag) tested positive for Coronavirus and shooting came to a halt. And after that when I resumed shooting after four-five days with all positivity, this (fire) happened. So I was like no it can’t happen again. And probably I was in tears because I had too much fear inside me due to my previous accident on Nach Baliye. When I saw this fire breaking out in front of my eyes, I started crying. After which my co-stars came running towards me. Like Sriti Jha asked me, ‘Are you ok?’, I said ‘I am absolutely fine. It’s just that why is this even happening. I am feeling really very sad.'”

She added, “I remember when this whole runout situation started everyone quickly vacated the area where their cars were parked. Everyone, except me. I learnt driving so I would not have to depend on anyone. It was just my second day of driving the car and going to the set. Before this I always had a driver. And after the incident I am also scared of driving.”