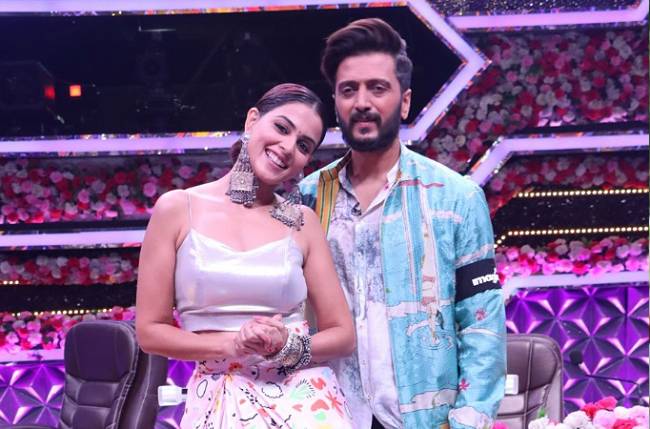 Bollywood’s most charming and gorgeous duo, Riteish Deshmukh and Genelia Deshmukh are all set to grace the upcoming weekend episode themed ‘Shaadi Special’ on Sony Entertainment Television’s Super Dancer – Chapter 4. While all the contestants perform brilliantly on hit tunes, contestant Aneesh Tattikota and his Super Guru Akash Shetty take the limelight by giving a stunning performance on the song ‘Maahi Ve’ that truly amazed everyone presents on the sets.

“Oh my God! Your performance reminded me of my wedding!” Genelia Deshmukh said. Elaborating further she said, “We may have modernized our weddings and turned them into another party, but, I adore traditional weddings and consider myself fortunate to have attended one. Every ceremony was a blast for me, and I was very emotional during my Bidaai as well, but we all had a great time.”

While complimenting their performance Genelia also revealed that during her wedding, Riteish had to touch her feet eight times as a part of their wedding ceremony.

The duo’s performance also left Riteish Deshmukh speechless, and he praised super guru Akash’s choreography. Riteish Deshmukh said, “Wow! I consider it a privilege to sit here and witness such a magnificent performance. Aap logon ne ek maahaul bana diya yahaan pe, yeh sirf gaana ya choreography nahi hai. It gave me the impression of being welcomed to a wedding ceremony of someone close to me”. He added.

Further in the show, Riteish and Genelia also played a game called, “Who is more likely to” where, host Rithvik Dhanjani asked questions to them about their marriage and the pair had to point a placard at each other and say who was more likely to be in that circumstance. After the game, it was evident that Genelia is riled up but at the same time also very romantic. Riteish, on the other hand, is the one who forgets the most and snores the most. “Maine aaj tak apne aap ko snore karte hue khud nai suna but, if Genelia says so, I will accept it.” Riteish said.

Tune in to Shaadi Special Episode on Super Dancer Chapter 4, this Saturday and Sunday at 8.00 PM only on Sony Entertainment Television.