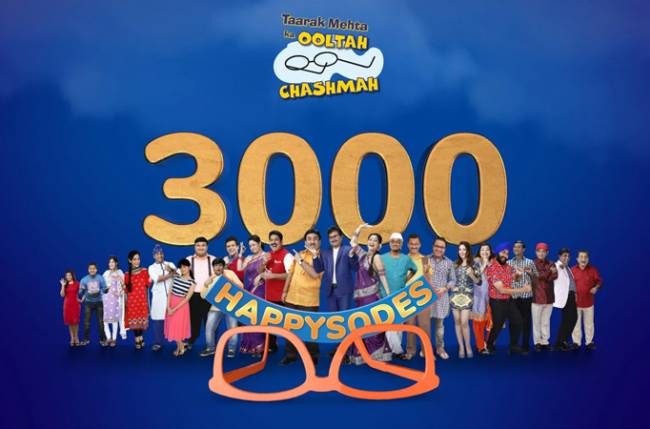 Neela Film Productions Private Limited’s iconic daily comedy show – Taarak Mehta ka Ooltah Chashmah (TMKOC) has completed a whopping 3300 episodes on 10th November 2021. Currently running in its 14th year, Taarak Mehta Ka Ooltah Chashmah continues to rule entertainment television and remains one of the most loved family comedy shows. TMKOC is India’s only family show that cuts across demographics to entertain audiences with humor. The show’s success is also attributed to its close connection with the Indian society which it represents through its story line and its characters. No wonder, the show’s Gokuldhaam Society which has become a landmark by itself, is often referred to as ‘Mini India’. Taarak Mehta Ka Ooltah Chashmah is authored and created by Mr. Asit Kumarr Modi.

“Taarak Mehta Ka Ooltah Chashmah is not just a show; it is an emotion. 3300 episodes while is another milestone covered, it still remains just a number. What counts for us, is the smiles that the show has been able to bring to people’s faces over the last thirteen years. I thank all the viewers and fans for their love and support through all these years. We remain committed to creating content that fills lives with laughter, happiness and positivity,” says Mr. Asit Kumarr Modi, Creator of the show.

First aired on 28 July 2008 telecast on SAB TV, Sony Pictures Network India, Taarak Mehta ka Ooltah Chashmah has always been at the forefront when it comes to creating awareness on societal issues. It was one of the Indian TV show that tried to create awareness about the COVID-19 pandemic by adapting it in its storyline. Taarak Mehta Ka Ooltah Chashmah airs every Monday to Saturday at 8:30 PM on SAB TV.