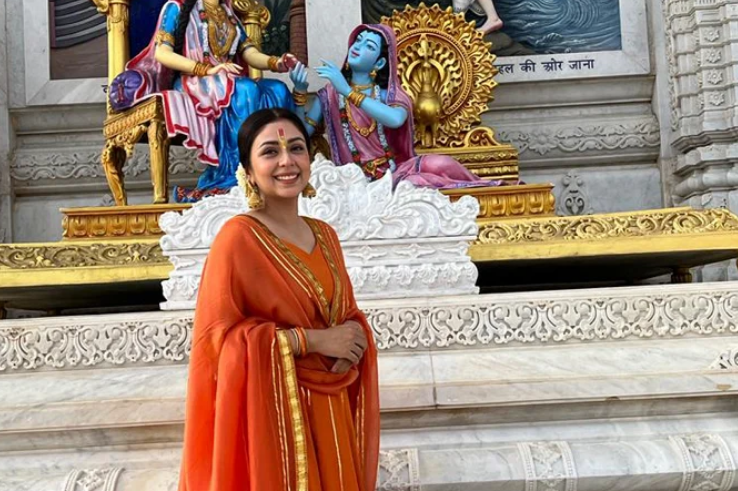 MUMBAI: Sony Entertainment Television has always ruled the roost when it comes to shows with unique storylines. In line with the viewer’s content preference, the channel is reviving the immemorial tale of Lord Krishna in its newest offering ‘Yashomati Maiyaa Ke Nandlala, which will be premiering on 13th June 2022. The show present the viewers with a novel perspective on the life of Krishna, one where the spotlight will be put on the loving mother-son bond between Yashoda and her son. To kickstart the journey, Neha Sargam who is playing Yashomati in the show will be visiting Vrindavan, the heart of the Krishna classic, to gain insights and give the show a touch of authenticity through the blessings of Lord Krishna.

What sets the show apart is its focus on Lord Krishna, hiding his divinity from his mother in the allure of her love. Jolly and naughty in his human form, he wants a normal childhood, with his mother’s love and cane being showered on him in equal amounts. He does not want Yashoda to treat him any different from other children his age. Reincarnated for the purpose of being human, the show’s narrative will show Lord Krishna between the throes of his Godly duties and simply living an ordinary human life, while living in Vrindavan, in the loving shelter of his family and friends.

The show will kickstart its launch in the divine city of Vrindavan because this is where Lord Krishna is believed to have spent his childhood. It’s home to temples, many dedicated to their mythological hero. The actress will be visiting the city to seek the blessings of Krishna and begin the voyage of telling the old classic stories and the Lord’s relationship with his mother, Yashomati.

Neha Sargam will be playing Yashomati Maiyaa with Rahul Sharma as Nand Maharaj, in the show. Romiit Raaj will be essaying the role of Vasudev with Suman Gupta will play Devaki, Ram Yashvardhan as Kans, and Hitanshu Jinsi in the pivotal role of Lord Vishnu. Maintaining the authenticity of the narrative, the lead actress Neha Sargam will conduct the press conference at Prem Mandir in the city of Vrindavan, thereby giving the media a sneak-peek into the light show at the place it all began for Lord Krishna — the holy city of Vrindavan. The next day begins with the aarti , followed by a visit to the Shri Krishna Janmasthan Temple.

Stay tuned to experience the bond between Yashoda and Lord Krishna in the upcoming show. Yashomati Maiyaa Ke Nandlala.

Neha Sargam as Yashomati Maiyaa
I’m grateful to visit Vrindavan and Mathura and excited to experience the holiness of the place and meet the people. It will help e know more about Lord Krishna and Yashomati through local lore and experiences. Vrindavan and Mathura itself means calmness and positivity, and I have always wanted to try Vrindavan’s famous methai and visit the famous Krishna temples there. As we’ve all grown up watching and hearing stories of Kanha, so it’s exciting for me to play such an integral part in ‘Yashomati Maiyaa Ke Nandlala’. It’s a great learning experience as well to revisit the bond shared between Yashodha Maiiya and Kanha from a different perspective altogether.