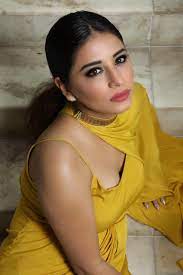 Ever since then, the diehard fans of Bhumika are eagerly waiting to see her back on-screen.

We got in touch with Bhumika who spoke in length about her upcoming projects and much more.

If given a chance to play a mythological/historical character what would it be?

I am not someone who would want to do a historical show because that doesn’t interest me at all. Watching such shows is a different thing but performing in these shows is something I’ll think twice before doing. I have previously done Nimki which was a complete package and I would love to do something like that. It was more of a realistic zone unlike a normal daily soap. Television shows have become very predictable. However, I don’t blame the makers because it is something that the viewers demand.

How much does a screen space matter to you whenever you choose a role?

Absolutely, screen space matters because that is what we are working for. We are working for recognition. I have learnt this from my debut show. Your role doesn’t matter, at the end talent speaks. There were a lot of actors in Nimki who had hardly had scenes but since they performed so well, they had a continuity track. Nimki was not a hit show just because of me but it was a team effort. The show does not just work on the leads. I feel there is a certain way of working in television that should change, it will benefit a lot. That is why people prefer doing negative roles and small roles in web shows rather than a TV show.

Tell us about your bond with Priyanshu Singh. you are the one who encouraged him to have an Instgaram account.

Priyanshu has been my best friend ever since the Nimki days. We are on set for the whole day and we don’t get time to connect to our fans. Nimki had a great fan following and now Maddam Sir too. It’s just tremendous. So many people message us. So many people tag me in Maddam Sir memes just because Priyanshu is my friend. They loved my and Priyanshu’s on-screen chemistry. So, I told him to be active on Instagram.

I am super proud of that guy. He has worked really hard and he is extremely talented. Thanks to the makers of Nimki as I met so many lovely people on the set whom I am still in touch with. When it comes to Priyanshu, he writes amazingly. The stories and poems he writes, he is mind blowing. When I came to know he writes, I was moved. Thankfully he is getting his due. I am really happy for him. Maddam Sir is doing so well.