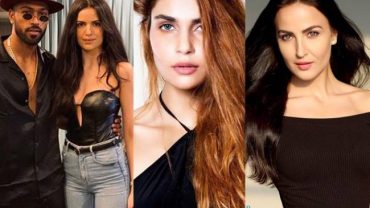 Hardik Pandya and Natasa Stankovic are currently one of the most talked about celebrity couples. During this lockdown period, the cricketer shared a couple of adorable pictures with Natasa, revealing a few glimpses from their quarantine days.

Hardik and Natasa make for a stylish couple and the two are going strong. They got engaged on 1 January 2020 on a dreamy yacht in Dubai. It was certainly a special New Year for the lovebirds.

The all-rounder cricketer had announced the good news on social media. Natasa, who made her debut in Bollywood with the Prakash Jha directorial Satyagraha and also seen in Bigg Boss 8 and Nach Baliye 9, too announced the same on her social media page.

However, did you know Hardik Pandya dated a few divas before getting engaged to Natasa? Yes, according to the media reports, Hardik dated a few divas from the glamour world. One of them is Kolkata based model Lisha Sharma, but they later parted ways. He also dated Elli Avram and reportedly their relationship was the longest, but this love story too ended.

After all this, Hardik finally found love in Natasa and they surprised everyone with their engagement news this year.