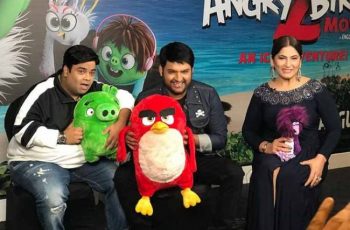 Kapil Sharma is one of the most popular comedians. His comeback show, the second season of The Kapil Sharma Show, is doing well. Fans and audiences are enjoying the show a lot and it is reflecting on the TRP chart. The comedian-actor, who has also worked in films such as Kis Kisko Pyaar Karoon and Firangi, is all set to lend his voice along with Archana Puran Singh and Kiku Sharda for the upcoming film Angry Birds 2.

Recently, at the trailer launch, Kapil was asked a couple of questions about his to be born kid, and his answers are definitely hilarious. First, when he was asked if, with this movie, he wants to prove to his son how he is a good father, the comedian said how even he does not have this much information as to whether he is having a girl or a boy. However, he did add something sweet and said that ‘I think it is destiny’s work and it is all destiny’s plan for you.’ He added how it is God who has done all the preparations and has given him such a kind of job, and he also said, ‘jo bhi hoga beta hoga ya beti hogi, swast ho, yahi prarthana hai ishwar se. (a girl or a boy, he/she should be healthy; that is all I pray for).’

Kapil also went on to add how when his kid will grow up, and see the kind of work he has done, he/she is going to feel very proud. He said how on growing up, the baby is going to see these kinds of films only (Angry Birds 2) and not go watch Sholay, so whenever the baby will see this film, he is going to tell the baby that boss that’s me.