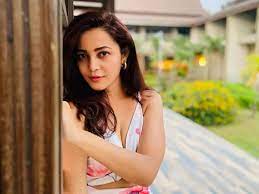 After giving a stellar performance in Star Plus’ popular drama series Yeh Rishtey Hai Pyaar Ke, Kaveri Priyam is back on screens once again.

Kaveri is seen playing the character of Monami in the show. She is paired opposite Shalien Malhotra.

Ziddi Dil Maane Na has hit the small screens a few months ago and it is doing extremely well.

Kaveri is seen playing the role of Monami in the show and her character is quite different from her previous shows.

In an exclusive interview, Kaveri opened up on Ziddi Dil Maane Na and much more.

I am liking the way different layers of my character have come to the fore. Monami is fierce and determined but she’s also caring and warm. She is open and understanding but she’s also firm and stubborn. She’s a great leader but not bossy. Monami sees the worst and best in people.

She’s not afraid to show her vulnerabilities but that doesn’t make her weak. That makes her a strong personality.

Coming from a privileged background and becoming a doctor says a lot about her passion for her profession. Because she didn’t become a doctor to earn money (she has seen a lot of it), but truly was driven to serve people.

What new can the viewers expect?

One wish that you truly want to come true at this very point in your life and why?

There are so many wishes that I really want to come true. But I don’t like to share my wishes because when you keep them a secret only then do they come true. So, I am not going to reveal them (Smiles).