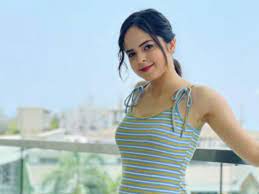 The actress plays the role of Sonu Bhide in the show and fans are loving her for her performance.

It’s been two years since Palak joined the show and she has managed to create a place in everyone’s heart in a very short span of time.

Palak has garnered a huge fan following over time and has become a household name.

In an exclusive chat, Palak opened up about her career, her personal life, and much more.

What changes according to you has your character seen from the beginning till now?

No major changes I would say because even before, Sonu was dear to her parents and she is still the same. She was sweet and intelligent and she is the same even now. With time, one becomes a little mature in real life also. I think the character is getting mature with time. It’s not that she was not at all understanding and mature but she has become even more understanding with time.

A fan encounter you will never ever forget.

I had shifted to a new apartment last year, there were a few kids who came to know that it’s me who will be their new neighbour. It was my second day in that building and I had stepped out of my house to leave for my shoot. The moment I stepped out of the elevator, there were around 15 to 20 kids standing just to see me and say “Hi, Palak Didi”. That was really sweet of them.

There’s one more such incident where I had gone to Oberoi Mall with one of my friends. It was around 10 to 11 in the morning. I was dressed up in pyajamas. While I had the mask worn, I thought no one would recognize me in the mall as it was quite early in the morning and the malls were not that crowded. However, a few fans recognized and approached me. I was shocked when they said that they recognized me by my walk as they regularly follow my YouTube Vlogs. I really felt good about it as my YouTube channel is something of my own and I created it. I have really worked hard on it. I will always remember these two fan encounters.

Any plans for further studies? If yes, what and how are you going to balance it?

Yes, of course! There are a few things in my mind. My graduation is done and I wish to do a Master’s. So, either I’ll do Masters in Psychology or MBA in Marketing. I still have some time to decide. But I would surely want to study further. I was pretty good at academics. I got an A+ grade in college and I scored 94 % in my Board exams. I’ll definitely complete my education as soon as I get a chance.