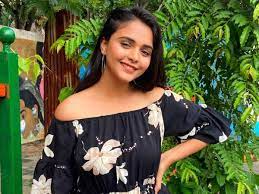 Star Plus’ show Anupamaa is working wonders on the small screens.

The show has managed to garner huge praises from the fans ever since the beginning.

Anupamaa completed one year on the 13th of July and it was indeed a happy occasion for the entire cast and crew and also the viewers.

The show has some stellar star cast who is impressing everyone with their acting chops.

We all know that Muskan is the youngest member of the entire cast of Anupamaa.

Her character Paakhi is being loved by the viewers.

While Muskan has created a special place in everyone’s heart with her stellar performance, she is yet to conquer the television world with her work.

There’s a lot of competition between the actresses of the same generation and each one of them is trying to raise the bar.

We asked Muskan if she feels competitive in such situations and how she is preparing herself to be right there.

Muskan said, ”I am constantly preparing for it. However, I want to work at my own pace. I want to do some great projects in the coming years. I am not someone who will try to do something by seeing others work. I am just going with the flow. I don’t want to mess things up just for the sake of competition. I don’t want to lose my focus by doing multiple things at a time.”

Well, Muskan definitely has come a long way in her career and is doing great for herself.