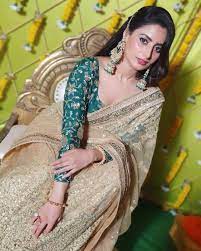 Star Plus’ popular drama series Ghum Hai Kisikey Pyaar Mein is being loved by the viewers.

Neil Bhatt, Aishwarya Sharma and Ayesha Singh play the lead roles of Virat, Paakhi and Sai on the show.

The viewers are seeing the love triangle of Sai, Virat and Paakhi on the show which has become quite complicated.

While Virat had promised Paakhi to never give a special place in his heart to anyone, he went on to marry Sai and now has fallen head over heels in love with her.

On the other hand, Paakhi has not moved on in her life and her husband Samrat too is missing ever since they got married.

Paakhi is lonely and now Virat too isn’t paying any attention to her.

The viewers are constantly seeing Paakhi struggling to get Virat’s attention and support but all in vain.

Aishwarya Sharma is being highly praised for her exceptional performance on the show.

Elaborating on the same, Aishwarya said in an interview, ”I still feel she is not negative but when there is anything about Sai, she gets impulsive, greyish because the man she loves doesn’t even support her. He always talks about Sai supports her, the next day of Paakhi’s marriage her husband left her and there is a feeling of losing everyone in the family especially Bhavani her only support. Paakhi feels all this is happening only because of Sai.”

Talking about the viewers’ point of view, Aishwarya further added, ”If people watch the show from Paakhi’s point of view then she is not negative. She is the only victim here who has no one; she lost her love, her husband and her career. And so many of them say “Bechari Paakhi ki kya galti hai” when family members taunt her and insult her. But people also enjoy saying, “Arey iske saath aisa hi hona chahiye”. But when Paakhi is hurt and she answers back then they say, “Isko taana marne ke alawa aur kuch aata nahi hai kya”. I know she is coming between Sai and Virat but she is stuck on that promise which Virat gave her. She is just not able to move on.”

Aishwarya concluded, ”The TV industry is all about black and white. They just forget the grey. So yes, if they feel it’s negative then it’s their choice, I can’t go and explain it to them.”